Who was our great neighborhood named after??        The answer is William Fisher Packer (April 2, 1807 – Sept 27, 1870) was the 14th Governor of Pennsylvania from 1858 to 1861. His father was James Packer from Chester County, Pennsylvaniaand his mother was Charity Packer. His ancestry was primarily Quakers from Philadelphia. When William was seven years old, his father died, leaving him and his four siblings to help run the house.[1]

At the age of 13, he began work as a printer’s apprentice at the Sunbury Public Inquirer and later at the Bellefonte Patriot. He also worked as a journeyman at Simon Cameron’s newspaper the Pennsylvania Intelligencer in Harrisburg.[1]

Packer studied law in Williamsport, Pennsylvania under future member of Congress Joseph Biles Anthony but did not practice, choosing instead to stay in the newspaper business.[1] In 1827, he purchased a controlling share in the Lycoming Gazette which he published until 1836. While working at the Lycoming Gazette, he began an early foray into politics as a major supporter of the construction of the West Branch of the Pennsylvania Canal. The state legislators in Philadelphia had opposed funding the construction and Packer penned an address to Philadelphia to raise public support for the project. The campaign worked and the Philadelphia delegation reversed their position to support the canal.[1]

Packer’s support for the canal did not go unnoticed and in 1832, he was appointed by the Canal Commission to serve as Superintendent of the canals.[1] The position was abolished in 1835 and Packer spent most of that year working for the re-election of Governor George Wolf and running for the Pennsylvania State Senate.[1] A schism in the Democratic Party cost Wolf re-election and Packer a Senate seat.

In 1836, Packer co-founded The Keystone, a Democratic newspaper published in Harrisburg. Packer, through the Keystone, was a supporter of David R. Porter for Governor against Joseph Ritner in the election of 1838. His support of Porter’s successful bid helped him earn an appointment to the Board of Canal Commissioners, a powerful post at the time.[1] After he was re-elected, Porter appointed Packer to the post of Pennsylvania Auditor General in 1842.[1]

In the State Senate, Packer was an ardent supporter of railroad development in Central Pennsylvania, working towards the establishment of the Susquehanna Railroad.[1] At the time, state policy was to restrain railroad development in southern Pennsylvania which would benefit Baltimore rather than Philadelphia. The act to authorize the railroad connected the York and Cumberland Railroad to cities like Williamsport and Sunbury and increased their access to regional trade. In 1852, Packer became the first President of the Susquehanna, stepping aside after the line was consolidated into the Northern Central Railway.[1]

During the 1856 Presidential Election, friend and fellow Pennsylvanian James Buchanan ran for the Democratic nomination against incumbent Franklin Pierce and Senator Stephen Douglas. Packer worked hard for his nomination and election.[2] Buchanan won the nomination at the 1856 Democratic National Convention in Cincinnati, Ohio and went on to win the Presidency over Republican John C. Frémont and Know Nothing candidate and former President Millard Fillmore.

In 1857, Packer was nominated as the Democratic Party Candidate for Governor. He was opposed by David Wilmot, author of the Wilmot Proviso which aimed to ban the expansion of slavery to territories acquired from Mexico, and Isaac Hazlehurst of the Native American Party.[3] The Panic of 1857 had crippled the nation’s economy, including the Pennsylvania iron industry. With strong support for tariffs in more normal times, the Panic increased Pennsylvania’s support for high tariffs, a stance which hurt the pro-free trade Wilmot.[3] The question of the day, however, remained the issue of slavery in Kansas. Packer forwarded a letter to his friend, President Buchanan, supporting the Kansas-Nebraska Act, but opposing an expansion of slavery in that state without a free and open process.[1] The split of the Republicans and Know Nothings made it difficult to defeat the united Democrats and Packer swept into office.[3]

In dealing with the economic crisis caused by the Panic, Packer vehemently blamed banks and the free issue of paper money over gold and silver coinage.[2] As part of a recovery plan, the Governor approved legislation to requiring state banks to limit the issue of paper currency to amounts covered by real security deposited with the state.[2]

In 1859, Packer sought to end the state’s involvement in construction and management of canals and railroads, selling off the state’s investments to the Sunbury and Erie Railroad.[2]

As his term came to an end, southern states had begun seceding from the union. Packer recommended that the nation’s differences be addressed in a national convention.[2] He opposed secession and, in his final address to the General Assembly, he stated, “It is therefore clear, that there is no Constitutional right of secession. Secession is only another form of nullification. Either, when attempted to be carried out by force, is rebellion, and should be treated as such, by those whose sworn duty it is to maintain the supremacy of the Constitution and laws of the United States.”[1]Packer retired from public life after the end of his term and died September 27, 1870 in Williamsport.

The Philadelphia Naval Hospital was the first high-rise hospital building constructed by the United States Navy. At its 1935 opening it represented a state-of-the-art facility for the Navy with 650 beds and a total floor space of 352,000 square feet (32,700 m2). The dedicated medical purpose of this facility contributed to the World War II mission as the center for amputation, orthopedic and prosthetic services for Navy, Marine, and Coast Guard veterans residing east of the Rocky Mountains.

The complex was developed as a tree-lined campus of 56 buildings and structures with the main high-rise building placed at the center and augmented with amenities of a Navy Base Exchange (BX) and gas station. The central building was flanked by lower buildings in a classical Beaux-Arts arrangement. It was a striking 15-story Art Deco steel-framed tower, faced with yellow brick and brown terra cotta and described in a survey of Philadelphia architecture as “one of the finest Art Deco buildings in the city.”[citation needed] The height was a significant departure from the two- or three-story naval hospital complexes that preceded it. Detailing the building’s interior included such significant features as anodized aluminum heater gratesdepicting a ship in full sail. The grates were set in marble panels in the vestibule and below were air intakes in the shape of dolphins.

By the late 1970s declining use of the facility and studies that determined the building incapable of being renovated for modern medical use signaled the end of the hospital’s role as major medical facility for the Navy. In 1988, under the Base Realignment and Closure Act of 1988 (BRAC), the Philadelphia Naval Hospital was slated for closure and disposal. All functions were relocated from the complex in 1993, and since that date the buildings were vacant and overseen by a small security and maintenance staff. The city of Philadelphia was approved to purchase it for re-use. It was finally demolished on June 9, 2001 at 7:02 A.M. 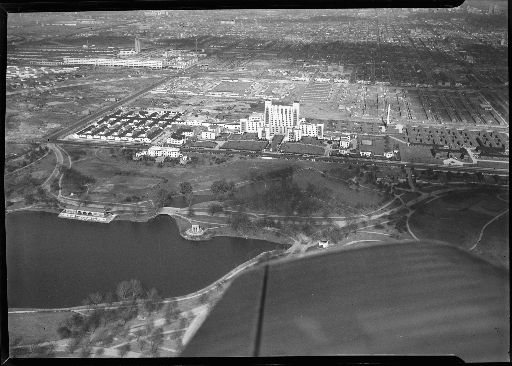 The original 1950s core community was named after the main Avenue, Packer Avenue. Packer Avenue itself was named in honor of William Fisher Packer, a former governor of Pennsylvania.

The Packer Park urban townhouses distinguish themselves in South Philadelphia by departing from the Philadelphia grid of streets and blocks of dense rowhomes. This included cul-de-sacs that were designed with a greater emphasis on a green park setting.

The Packer Park community name expanded in 2003–2007 adjacent to the original footprint became known as the “Reserve” at Packer Park, a separate housing development of 230 homes built on a triangular land area to the west of 20th Street, north of Pattison, east of Penrose Avenue. The Reserve was built on what was formerly a United States naval housing site, built in 1962 and abandoned in 1995 after the Cold War.

Error: Twitter did not respond. Please wait a few minutes and refresh this page.